All-In-One OfflineMaps+ offers you to access a wide range of maps.

Bored to wait for maps to display? Once displayed, maps are stored and remain available, quickly, even with no network access.

• Want more than just roads on your maps? You will find what you need here;
• Used to go to places with poor network coverage? Everything will stay available;
• Used to go abroad? You won’t be lost anymore;
• Have a data allowance limit? It will reduce your usage.
★★ Maps ★★
A lot of maps are available, including classical road maps, topographic maps, aerial (satellite) maps and various layers that can be added over any maps: OpenStreetMap (Roads, Topo), USGS National Map (Hi-res topo, Aerial imagery), Worldwide Sovietic topo maps, Google Maps, Bing Maps, Yahoo Maps, Yandex Maps, and various per-country topo maps (incl. Europe, UK, Spain, Italy).
• All maps can be stacked in layers, with precise opacity control.
• Select and store large areas in few clicks.
• Stored space is clear and can be easily deleted.
★★ Display, store and retrieve unlimited landmarks ★★
You can add various items on the map such as waypoints, icons, routes, areas and tracks.
You can easily manage them using the powerful SD-Card Landmarks Explorer.
★★ On-map GPS Localization & Orientation ★★
Your real location and direction are clearly displayed on the map, which can be rotated to match your real orientation (depends on device capabilities).
Easy turn on/off to save battery. 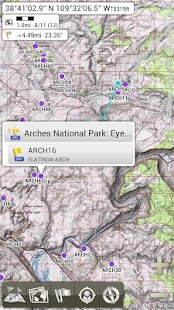 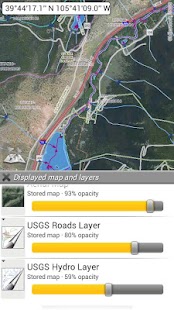 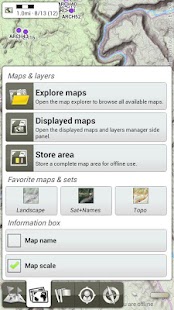 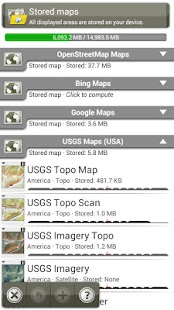