Chameleon is a revolutionary tablet-specific launcher that lets you create multiple home screens!!

Chameleon is a revolutionary tablet-specific launcher that lets you create multiple home screens, each with your own layout of widgets and apps. The Chameleon system includes an innovative context based home screen system giving you the most relevant information that you want, when you want it.

The Next Generation of Widgets.

Android widgets are not all created equally – and that’s the problem – so we decided to raise the bar. The result is widgets that look beautiful together and are as easy to layout as drawing on a screen. Take a look at some of our other widgets or build your own with our custom API.

Home Screens that Change With You

Your information needs may change throughout your day, so Chameleon includes an innovative context system. You can create context rules based on GPS locations, WiFi networks and time ranges, allowing you to define which Home Screen is the most relevant for any situation.

Quickly set up Home Screens, Widgets, App Trays, and Wallpapers all with a few gestures. 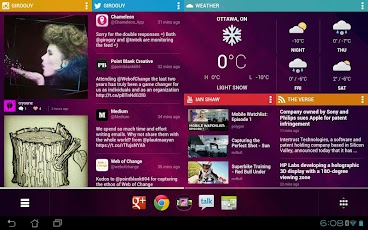