Gain powers and strength with a wide variety of abilities and upgrades. Fight over 70 waves and 7 bosses to ultimately become the only one left standing!

★ Awesome retro pixel art graphics and music
★ Physics based sword combat with parry and shield mechanics
★ Upgrade your character over time with better stats and really cool abilities like push, freeze, bubble, whirlwind and dart
★70 levels of soldiers, slimes, archers, wizards, loot gnomes, berserkers and mini bosses
★ Push your opponents off the pillar for easy kills and more points or strike them where they stand to get their loot
★ Ladder based levelling with checkpoints every 10 levels, score resets each time you die 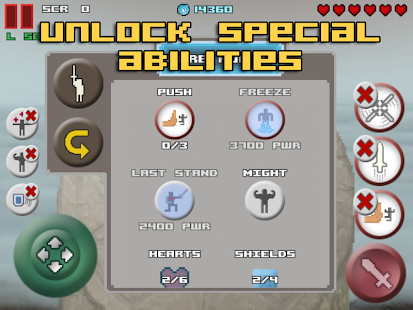