Tom is back with an all new adventure! Tom is your cat that responds to your touch and repeats everything you say in a funny voice.

Since Tom is now an international celebrity, he’s moved out of the alley and into a cool apartment.

But everything is not perfect for Tom, his neighbour Ben teases and pesters him constantly.

★★★ HOW TO PLAY ★★★
✔ Talk to Tom and he will repeat everything you say with a funny voice.
✔ Pet Tom’s belly or head and make him purr.
✔ Poke his head, belly or feet.
✔ Slap Tom’s face left and right.
✔ Pull or touch his tail.
✔ Press the fart button to see Ben fart and Tom grab his nose in disgust. After that Tom repeats what you say with his nose closed for a while.
✔ Press the bag button to make Ben pop a paper bag and scare Tom. It’s hilarious.
✔ No ads
✔ Press the phone button to make Tom play with the original Talking Tom app and repeat after himself in a funny loop.
✔ Press the feathers button to see Ben hit Tom with a pillow.
✔ Press the ? button to make Tom pull random items from behind his back.
✔ Record videos of Tom and share them on YouTube, Facebook or send them by email or MMS. 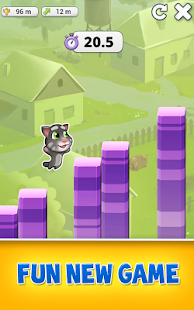 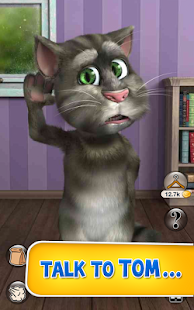 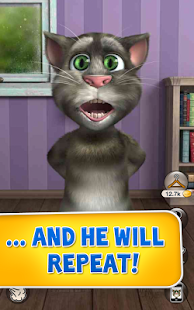